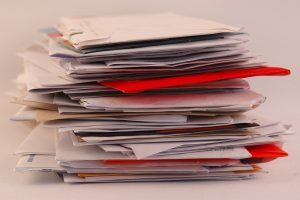 Clients have often asked me about the OHIO (Only Handle it Once) rule while organizing their papers during my 18 years as a professional organizer. When they handle papers more than once, they believe they’re doing something wrong.

Thinking OHIO should always be applied is a mistake.

Maybe it’d be easier to follow if it went something like this: Only handle it once, moving it forward with each touch, to completion.

Each time the invitation was handled was appropriate.

The differences are pretty obvious. But we really don’t stop to think about how many times we handle papers — and how much time we waste — so maybe this will get you thinking.

The idea is to handle papers as few times as possible, not put them aside to deal with later except when necessary.

Here’s a favorite time-management and productivity recommendation from David Allen’s book, Getting Things Done. His 2-Minute Rule states that if it takes less than two minutes, do it now. Brilliant!

© 2004 - 2022 | An Organized Approach – THE approach for organizing success | All rights reserved.
MENUMENU
Back To Top